The decision made by the British people in the 23 June 2016 referendum has multiple consequences, many of them legal. Some have already been addressed, but the issue of what Brexit could mean for European citizens’ privacy and data protection rights has been pushed to the background.

The regulatory framework for data protection in the European Union conferred total freedom of circulation on data within the 28 Member States.  The United Kingdom’s exit from the EU, and consequently from that legislative environment, will therefore mean that its citizens will be considered as established in a third country, and issues such as those currently existing with the United States will have to be contended with.  Basically, sending data from any EU country to the UK will constitute an international data transfer, with the legal effects that this entails.
Obviously, given the importance of massive data processing for a company from any sector, the UK is not going to remain aloof from its former fellow Member States, since not interacting with the EU in this field would leave it out of the game in a sphere that is vitally important for the economy.

This situation obviously gives rise to uncertainty -which will have to be cleared up by the British government in the coming months- concerning the decision to be made on the subject of data protection in the island State. 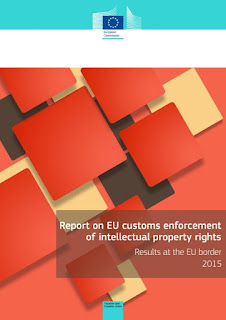 On 23 September, the European Commission published its report on the results of the border measures against infringement of industrial and intellectual property rights in 2015.

The level of effectiveness of the border measures provided for under (EU) Regulation No. 608/2013 is very high: the goods detained were destroyed in 80% of cases, legal proceedings were undertaken in 9% of cases and the goods were only found to be genuine in 2.7% of cases.

China continues to be the main country of provenance of goods seized by customs in the EU (40%). By category, the main countries of provenance for the goods were the following: Benin (foodstuffs), Mexico (alcoholic beverages), Morocco (other beverages), Malaysia (body care products), Turkey (clothing), Hong Kong (mobile telephones and accessories, memory cards, computer equipment, CDs/DVDs and lighters), Montenegro (cigarettes) and India (medicines).

Products for daily use that could pose a danger to the health and safety of consumers (such as foods, beverages, toiletries, medicines, electrical appliances, toys, etc.) make up 25.8% of the total seizures.

The most used modes of transport, per number of seizures, are still postal and courier deliveries (77% of seizures), commonly in response to purchases made online.

The principal categories of goods seized in 2015 were cigarettes (27% of seizures), other goods, such as batteries, glue, furniture and lamps, manuals and other documents, magnets, pesticides, etc. (10%), toys (9%), labels, tags and stickers (8%) and foodstuffs (7%).

It is striking that labels, tags and stickers have risen to the top 5 on the list of goods seized in 2015, which would appear to confirm the latest technique used by criminal counterfeiting organizations of importing unbranded articles, separately importing branded labels and stickers and subsequently affixing the brands to the articles once in the EU. This technique was highlighted by Europol and the EUIPO in their 2015 Situation Report on Counterfeiting in the European Union of April 2015.