The 18 September 2014 ruling by the Court of Justice of the European Union (CJEU) (C-205/13, "Tripp-Trapp" case) has added definition to the interpretation of specific three-dimensional shapes for registration as trademarks.
Tripp-Trapp is the name given to a children's highchair created by the Danish designer Peter Opsvik and sold by the Stokke company since 1972. The highchair is designed so that the height of the chair can be regulated as the child grows The originality of the design is not disputed, as demonstrated by the fact that the proceedings that prompted the request for a preliminary ruling as well as parallel proceedings in Germany both concluded that the chair in question fulfils the originality requirement for entitlement to copyright protection. However, the issue of trademark rights is a different matter.
As we all know, trademark protection is virtually indefinite, which is why, on occasion, rightholders of industrial designs and even copyright in product shapes may find it attractive to try to perpetuate protection by means of trademarks. Lawmakers were aware of this when the First Council Directive 89/104/EEC to approximate the laws of the Member States relating to trademarks was drawn up to include, under Article 3(1)(e), specific grounds for the refusal or invalidity of signs consisting exclusively of:
- the shape which results from the nature of the goods themselves, or
- the shape of goods which is necessary to obtain a technical result, or
- the shape which gives substantial value to the goods.
As a result, when the German company Hauck GmbH & Co. KG ("Hauck”) began to market its Alpha and Beta chairs using a design that was very similar to that of the Tripp-Trapp chair, Stokke decided to take action on grounds not only of copyright but also of its three-dimensional trademark registered in 1998: 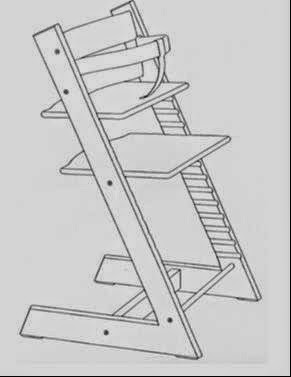 Hauck subsequently filed a countersuit claiming that the said trademark was invalid because the design ensues from product function rather than acting as an indicator of business origin. On appeal the Hoge Raad der Nederlanden (Supreme Court of the Netherlands) decided to stay the proceedings to refer a series of questions dealing with how to interpret the said ground for refusal to the CJEU for preliminary rulings.


This is an important ruling that is to be welcomed because it uses sound judgment to clarify the legal parameters applying to the registration of three-dimensional marks.


The CJEU first assessed whether the ground for refusal set out in the first indent of Article 3(1)(e) (the shape which results from the nature of the goods themselves) refers only to a sign consisting exclusively of a shape that is indispensable to the function of the goods or whether it can also refer to a shape that features one or more substantial characteristics of the goods or the generic functions of the goods. The CJEU opted for the second interpretation of this provision. According to the CJEU, the first interpretation would leave the producer of the goods no leeway to make a personal essential contribution, nor would it allow the objective of the ground for refusal in question to be fully realized.
Second, the CJEU assessed whether the ground for refusal relating to the shape which gives substantial value to the goods may apply to a sign consisting exclusively of a product shape having several characteristics, each of which may give that product substantial value. The CJEU replied to this question in the affirmative, stating that this ground for refusal may not be limited solely to the shape of products having ornamental value only. Rather, it also extends to products which, in addition to an artistic value, have other characteristics that give them relevant value (for example, with regard to security, ease of use, quality, etc.). In this connection, the CJEU added that the relevant consumer’s perception of the sign is not a decisive element but an additional criterion for assessing the applicability of this ground for refusal.
Third, the CJEU stated that the grounds for refusal set out in Article 3(1)(e) are independent and may not be applied in combination.