On 16 September 2015, the Court of Justice of the European Union (CJEU) delivered its long-awaited judgment (case C-215/14) on the referral for a preliminary ruling made by the High Court of Justice of England & Wales concerning whether it was possible to register the shape of Kit Kat chocolate wafers as a trademark: 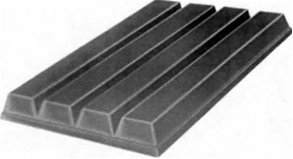 Nestlé had filed an application for registration of the mark with the UK Trademark Office.  However, the Office accepted an opposition lodged by Cadbury and refused the application on the grounds that it had not been sufficiently demonstrated that the mark had acquired distinctive character.  It considered that the shape that had been applied for had three features, as follows:


According to the UK Office, the first of those features was a shape that derived from the very nature of the goods claimed (with the exception of cakes and pastries), and the other two were necessary to obtain a technical result.

That decision was appealed to the High Court of Justice, which found that there was not enough case-law from the Court of Justice in respect of the issues that had been raised, and therefore made a referral for a preliminary ruling.  In its judgment, the CJEU changes the order of the three questions that had been referred to it, and first of all examines the question concerning the possibility of cumulatively applying the bar to registration of signs consisting of the shape of goods where that shape is imposed by the nature of the product and where it is necessary to obtain a technical result.  The reasoning behind this change of order is that a sign to which that ground for refusal applies can never acquire distinctive character through use.

In that regard, the CJEU reiterates the legal doctrine established in the recent Hauck judgment, C 205/13, EU:C:2014:2233 (Tripp-Trapp chair), in the sense that the three particular grounds for refusing to register product shapes operate independently of one another. Therefore, in the Court’s view it is irrelevant whether a certain shape could be denied registration on the basis of a number of grounds, and it will suffice for just one of those grounds to be fully applicable to the shape in question in order for registration to be denied.

The third question referred by the High Court referred to the bar to registration of shapes necessary to obtain a technical result. The High Court sought to clarify whether that prohibition referred solely to the way in which the goods functioned, or whether it also applied to the manner in which they were manufactured.

The CJEU finally analyses the first question referred to it. Actually, this question is more in line with UK court practice than that of the other EU countries, the reason being that in the United Kingdom, the courts, when examining the distinctiveness of a trademark that has been acquired through use, consider that it will not suffice for the holder of that trademark to demonstrate that a significant proportion of the relevant class of persons recognise that mark and associate it with its products (as Nestlé had done in the case under examination by submitting a market survey).  On the contrary, they also require the trademark holder to demonstrate that those persons rely upon that mark as an indicator of the product’s business origin, as opposed to any other marks which might also be present.

This additional requirement, or higher standard of distinctiveness, if you like, is obviously more difficult to satisfy, particularly in the case of marks consisting of the shape of a product which, in virtually all cases, is presented on the market in conjunction with word or figurative trademarks.  This is also the case with Kit Kat, which has always been marketed in packaging featuring a characteristic logo, and where the actual words Kit Kat are engraved onto the four fingers comprising the chocolate wafer: 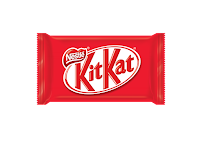 The CJEU supports its findings in respect of this question on the criteria followed in the Nestlé judgment, C 353/03, EU:C:2005:432, according to which for a trademark to acquire distinctive character through use, it is not necessary for the mark to be used alone; it can be used as part of a registered trademark or in conjunction with another mark.  Nevertheless, echoing the later judgment, Colloseum Holding, C 12/12, EU:C:2013:253, it points out that the essential requirement is that, as a result of that use, the sign for which registration as a trademark is sought may serve to identify, in the minds of the relevant class of persons, the goods to which it relates as originating from a particular undertaking.

In this judgment, the CJEU clarifies, in line with the Advocate General’s opinion, that in order to meet that requirement, the applicant of the trademark registration must prove that the mark alone, independently of any other elements that might have accompanied it in use, serves to identify the business origin of the product.


In practice, the most direct way in which to satisfy this requirement will be by means of a survey in which participants are shown the product marked solely with the sign for which registration is sought, without any additional elements that may be present on the product in the marketplace. This was done by both Nestlé, in the national proceedings that gave rise to this judgment, and Levi Strauss, in the proceedings that led to the Colloseum judgment.